On Wednesday, February 6, 2019 about 30 people gathered on the top floor of the Covington & Burling building in Downtown DC to thank and honor a very special person. The lunch—a collaboration between Covington & Burling and NLSP about a year the making—was a surprise event for Bingham Leverich, the longtime Covington & Burling partner who for the last 50! years has been a steadfast champion and tireless advocate for Neighborhood Legal Services Program. Bing was surprised by a room full of friends, colleagues, and guest on the 11th floor of the Covington & Burling building--just steps from his office. No small feat.  Attendees included past and present NLSP board members, Co-Chairs Allison Binney and Anne Ford, Shankar Duraiswamy (also is a partner at Covington & Burling), Iris Green, Sara Rearden, and past co-chair Blake Biles.  Covington & Burling also had a large contingent headed by Michael Labson, Carolyn Corwin, Alan Pemberton and several other partners and Pro bono managers including Corinne Goldstein was instrumental in helping suprise Bing.  NLSP Staff was represented as well with Karen Newton Cole, Kathy Hollins, Mark Spira and Bradford Voegeli.  Willie E. Cook Jr. and Susan Schapiro represented previous NLSP staff. 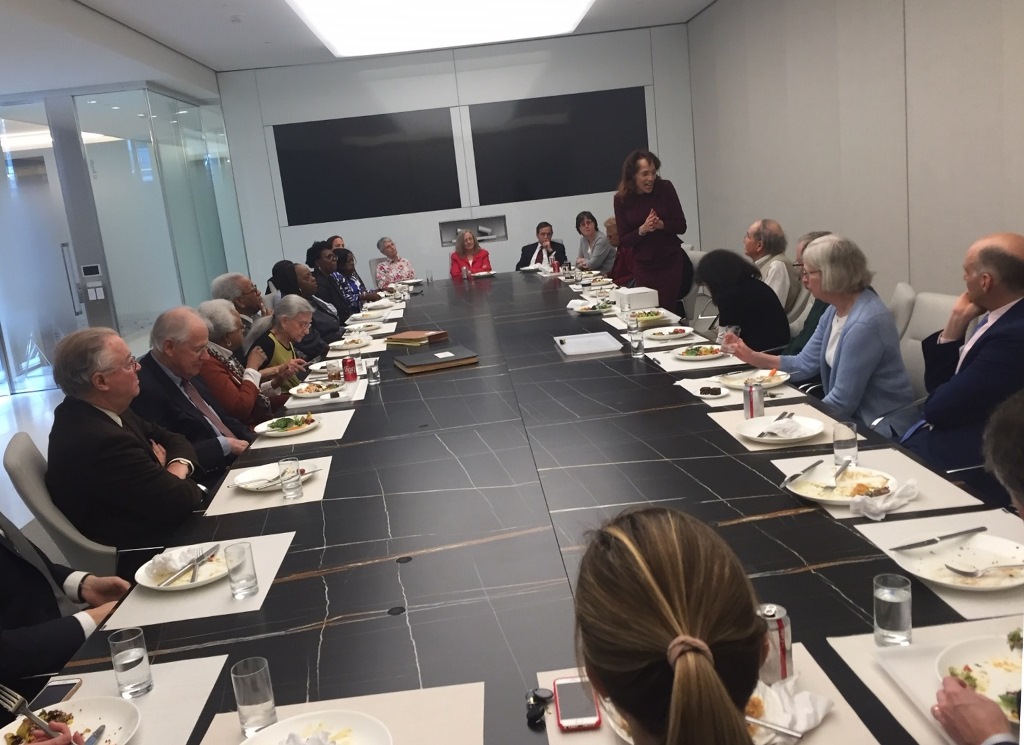 In December 2017, Bing stepped down from the board of NLSP, where he had been a member for over 30 years and co-chair for many of those. But Bing’s relationship with NLSP started long before his board service.  In 1969, Bing was one of the first Covington associates to do a rotation at NLSP.  Bing’s “6-month” rotation lasted almost two years and helped set the stage for a relationship that has spanned 50 years and over 225 Covington loaned associates.  Asked about his recollections of his time at NLSP, Bing said that he remembered starting in the 14th Street office opposite the farmer’s market on the upper floor of an old building and that the windows in his office were so dirty you could not see out of them.  In classic Bing style, he rolled up his sleeves and spent the first couple days cleaning the windows and the rest of his office.
Covington & Burling’s loaned associates at NLSP have been an unbroken chain going back to 1969 beginning with Bing and Bob Sayler (the first rotating associates).   As a testament to this, current NLSP Covingtons--rotating associate Miles Galbraith and rotating paralegal Boniface Echols--were both at the lunch.
“Steadfast” and “tireless” were two words that came up often at the luncheon when people described Bing, but the word that came up the most was “kind”. Michael Labson, a partner on the Management Committee at Covington, went so far as to say Bing could be the kindest lawyer he had ever met.  Anne Ford, current NLSP Board co-chair, spoke about how Bing approached her when she was a client at NLSP and encouraged her to join the board.  Then it was Bing who called her after she joined the board and told her he wanted to step down as co-chair and he wanted her to take her place.  She said, “He saw something in me that I didn’t even know was there.”
Willie E. Cook, Jr.  the former Executive Director of NLSP  (Willie served as ED from 1975 until 2003) spoke about his time working with Bing when they were both young lawyers just starting out at NLSP and his time as Executive Director when Bing, as a Board member and often Co-chair of the Board, was always there through good times and the difficult years when NLSP’s federal funding was slashed almost 50%.  Willie, pretty much brought the entire group to tears with his brief remarks that ended with “Bing, I love you.” Of course, Bing, couldn’t let that pass without responding “I love you, too.” 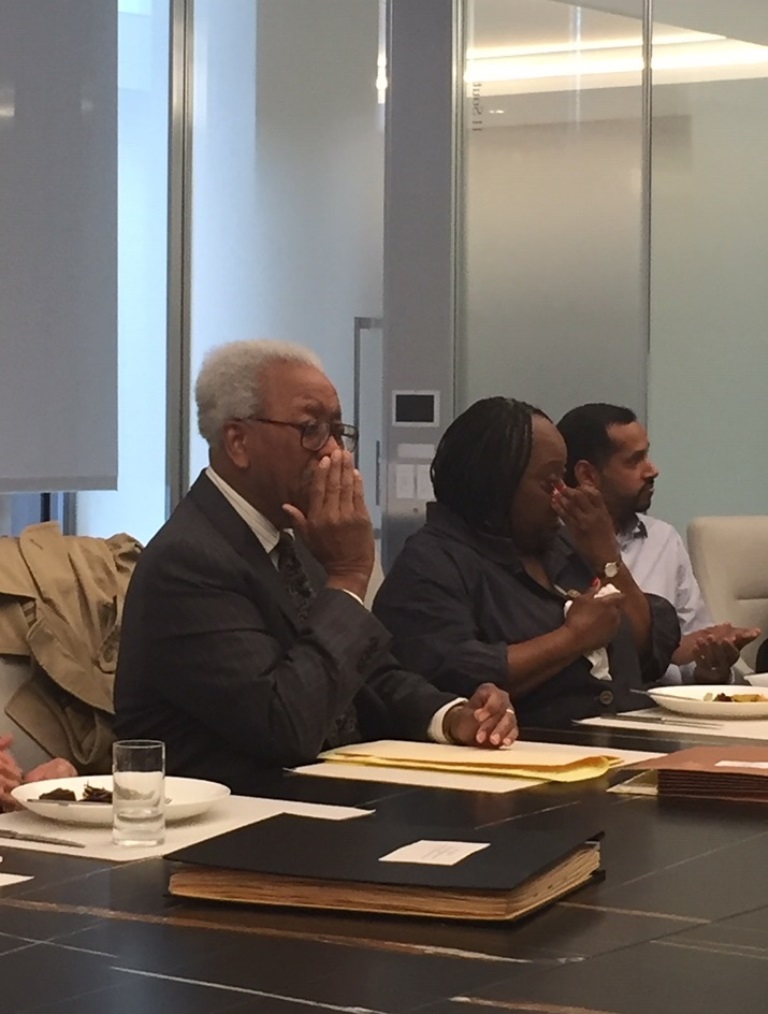 Karen A. Newton Cole, Executive Director of NLSP, herself an alumnus of Willie and Bing’s time leading NLSP, presented Bing with a crystal gavel commemorating his 50 years of service and dedication to NLSP.  Sara B. Reardon, NLSP’s longest serving board member spoke about working with Bing over 3 decades and his ability to get things done and to weather any crisis and see NLSP through tough and trying times. She, of course, mentioned his kindness in the face of any issue.
The tributes concluded with Blake Biles (who just stepped down as co-chair of the NLSP board in 2017) speaking about learning from and working with Bing.  He also shared a bit about what he learned about Bing working closely with him for a number of year.  He shared that Bing for years and years and years has eaten peanut butter and jelly sandwiches for lunch and dinner every day, without fail.  In search of a way to give back just a little of everything Bing had given to him, Blake presented Bing with enough peanut butter and jelly to last him the next 6 months with a little Nutella to top it off.
Bing, truly surprised, and largely unprepared for all of the praise and kind words simply thanked everyone for being there and for the many kind words and let everyone go enjoy a piece of his cake.

Thank you Bing for all you have done for NLSP and the generations of Covington associates you have helped guide and mentor and for the leaders and lawyers you have supported and mentored at NLSP.